How can hypnotherapy help me?

This information is intended to explain how hypnotherapy is used for treating Irritable Bowel Syndrome (IBS).

What is Irritable Bowel Syndrome?

Irritable Bowel Syndrome is a condition that affects about 15% of the population. The symptoms differ from one person to another, ranging from minor symptoms that appear from time to time to constant and intransigent symptoms. The symptoms include stomach pain and discomfort, swelling and disruptions in bowel habits (constipation, diarrhea or both). People experience symptoms such as bowel movements with mucus, gas pains, heartburn, nausea and a sense of being full after eating, as well as other symptoms not connected to the bowel, for example symptoms related to the bladder, general pain and suffering, back pain and extreme fatigue.

The digestive system includes the mouth, the esophagus, the stomach, the small intestine, the large intestine, the rectum and the anus (see illustration). The purpose of the digestive system is to digest food, absorb nutrients into the bloodstream and remove waste through the intestines. The food that moves through the digestive system is broken down by chewing and by mixing and grinding in the stomach. It is digested by the enzymes in the saliva, the stomach and the small intestine. The acid in the intestine is essential for the enzymes to work and also helps in preventing bacterial infections. The consistency of digested food is liquid and the nutritional components are absorbed from the small intestine into the bloodstream. What remains is waste, which is removed in the form of stool. As the stool moves through the large intestine, water is reabsorbed into the body and the stool gradually becomes more solid. If this movement is faster than normal, the water has less time to be absorbed and the resulting stool is softer or more liquid. If the movement is too slow, more water is absorbed and the stool becomes harder. This partially explains what happens in cases of diarrhea or constipation.

The food is moved through the digestive system by means of muscles located throughout the system, from the esophagus to the anus. Normally these muscles contract rhythmically and in unison in a process known as peristalsis. This type of smooth muscle is also found in other internal organs, such as the bladder, the blood vessels and the lungs, and differs from skeletal muscles in a number of ways. For example, smooth muscle contractions are ordinarily not consciously or willingly controlled. The digestive system also has a large collection of nerves and produces many chemical-biological substances that regulate its operation. For example, many people feel the need for a bowel movement soon after eating. This is due to the messages that the nerves send from the stomach to the large intestine to stimulate its action. 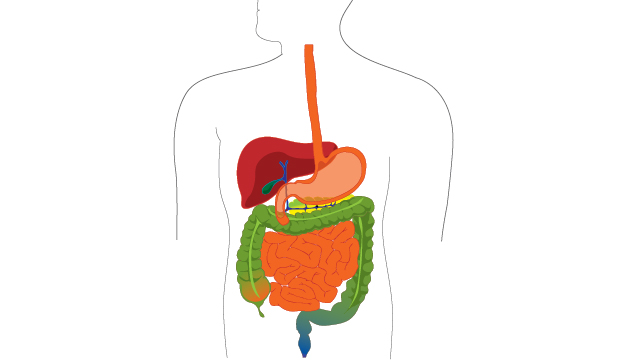 The inner lining of the digestive system also includes many cells and nerve endings that identify the presence of food or waste products, as well as cells that secrete mucus in order to lubricate the digestive system and facilitate the passage of food. When stool is present in the large intestine and the rectum, the nerve endings in the intestine's inner lining are stimulated, sending messages to the brain that are interpreted as the urge to open the intestine. Of course, opening the intestine is mainly a matter of willful control and entails relaxing the external sphincter muscle so the stool can pass.

What happens to the digestive system in IBS?

The digestive system, the brain and the psyche

Like the rest of the body, the digestive system is influenced by the actions of various nerves and biological-chemical substances originating in the brain and the spinal cord. These nerves which form the autonomic nervous system supply all the internal organs, including the heart, the blood vessels and the bronchi in the lungs. Some of these nerves—the parasympathetic nerves—bring about changes in the body that are related to relaxation, for example slowing the heart rate. Other nerves—the sympathetic nerves—bring about physiological changes that prepare the body for action. For example, if you run, your pulse and respiration increase, your pulmonary bronchi expand and the blood vessels in your muscles widen. All of this serves to bring more oxygen to the muscles so they can work better and faster. Such changes also take place when you see something frightening or threatening, whether the danger is real (e.g., someone is attacking you at knifepoint) or whether it is imagined (e.g., you are nervous before giving a lecture). This is known as the "fight or flight" response. Other changes can also take place, such as a strong urge to empty your bladder or bowels. All of this happens automatically, without any conscious direction on your part. If something happens that your brain interprets as threatening, you experience fear or anxiety and at the same time your brain reacts by sending messages to your body that produce these bodily changes.

How can hypnotherapy help?

As noted, like the rest of the body, the digestive system is sensitive to our emotional state. Almost all of us have experienced the need to run to the bathroom due to an attack of diarrhea preceding a stressful event such as an exam. The body and the psyche are not separate entities but rather are closely related. In the case of IBS, we do not say that it's all in your head. Some people notice that their symptoms are aroused or worsen when they are stressed and worried, while others do not notice any connection. We believe that the digestive system is influenced by the psyche. Hence, we can use the individual's psyche and thoughts to change digestive system functioning. People can learn to control physiological mechanisms that are not ordinarily under their conscious control. For example, people who engage in yoga use advanced meditation techniques to control their blood pressure, heart rate and digestive processes. Hypnotherapy works similarly, taking the approach of "mind over matter" to teach the individual skills for controlling the digestive system.

What is hypnotherapy and how is it practiced?

Some people are alarmed by the thought of being hypnotized. Therefore, it is important to shatter the myths surrounding hypnosis. Hypnosis is an intellectual skill or technique that people acquire to enable them to use their brains differently. A hypnotic state or trance is in effect a state of focused attention. It is something that everyone does several times a day without calling it hypnosis!! This is what happens when you read a book and create pictures in your head of certain scenes or characters. It happens when you are absorbed in a movie or a daydream and don't hear someone who is talking to you. During the therapeutic sessions, the job of the therapist is to help the patient intentionally reach a hypnotic state. This can be achieved in many ways, as appropriate for each individual patient. One of the most common ways is to use a relaxation method or to ask the patient to imagine and focus on a particular scene. During hypnosis, you are not asleep and you are not sedated. You use the words of the therapist to become calmer, more relaxed and intellectually submerged. You can hear everything happening around you, but noises disturb you less. The most important thing is that you control the situation, not the therapist! Some people are naturally more able than others to generate a deep and relaxing experience for themselves. This ability is likely connected to their creative imagination. Every case of hypnosis is self-hypnosis, and this skill improves with experience. It is important to note that there is no need to enter into a "deep" trance to benefit from hypnotherapy.

The conscious psyche contains our logical, reasonable and analytical thought processes and is likely related to left-brain functioning. The unconscious psyche, which is probably related to right-brain functioning, includes our creative imagination and intuition. It also stores the memories, skills and habits we use automatically, such as reading and driving. In addition, all of us hold certain beliefs and values about the world and ourselves that are based on our previous experiences and the influence of others, particularly from childhood. These have an automatic effect on the way we think, feel and behave, because we interpret everything that happens in view of these beliefs and values. It is not what happens but rather the importance we attribute to what happens that determines our response. For example, upon hearing someone say something, one individual can be angry while another can be amused because these two people interpret what was said differently. Finally, the unconscious psyche is engaged in controlling the body through the mind.

Hence, when something is interpreted as frightening, the individual experiences fear and the unconscious mental processes cause the brain to send messages that will change the individual's heart rate and bring about other physiological changes.

In 1984, Prof. P. J. Whorwell, a gastroenterologist from the University Hospital of South Manchester, England, began using hypnotherapy to help people with intractable IBS symptoms that did not respond well to pharmacological therapy. He found that 75-80% of his patients improved and maintained their improved condition even after the therapy ended. Hypnotherapy today has similar success rates. The goal of the therapy is to give the patient control over the digestive system instead of the digestive system controlling the patient. While hypnotherapy is not a cure, after treatment many patients are symptom free or experience only minor symptoms. Your chances of benefitting from this treatment are good. While there is no guarantee that you will never again experience IBS symptoms, you will have the necessary skills for relieving the symptoms and regaining control at any time.

Laboratory tests have shown that hypnotherapy directly influences digestive functioning. Hypnosis changes digestive system motility, muscle contractions and even digestive system sensitivity. In many patients with IBS, the intestine is hypersensitive. After a course of hypnotherapy, the intestine often returns to normal. People who have undergone hypnotherapy also tend to feel better about themselves, are capable of coping better in general and experience improvement in their quality of life.

The therapy comprises a course of 12 weekly sessions. It is hard to predict when a particular individual will begin to feel improvement. Some people detect improvement after only a few sessions, while others need more time. Very few people continue beyond the 12 sessions. Patients are free to return for additional "booster" sessions if they feel the need.